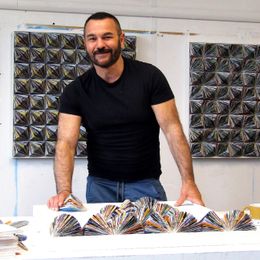 Alberto Fusco is a London-based Italian artist, internationally sold and exhibited. Born in Naples (Italy), Fusco has been creative since a young age, leading him to study art and become the assistant of prominent contemporary Neapolitan artists. To further pursue his passion for figurative art, in particular sculpture, in 1994 Fusco decided to move to London to expand his artistic study and practice, earning a BA (Hons) in Fine Art from Roehampton University with a specialization in the art of mosaics.

At present, Fusco’s practice revolves around giving life to artworks by utilizing recycled paper magazines that would otherwise be discarded and thrown away. This practice is particularly relevant in a society that is only now coming to terms with sustainability of the planet for future generations. His artworks are created by meticulously folding and manipulating recycled magazine papers, transforming them into textural geometrical forms, which ultimately develop into sculptural pieces of their own right.

February 2012 Love is. The London pop up Gallery. Group Exhibition

October 2013 The Other Art Fair

November 2012 The Other Art Fair