This site requires JavaScript. Please enable it in your browser settings.
Buy I Need A Kiss by Dangerous Minds Artists | Artlimes 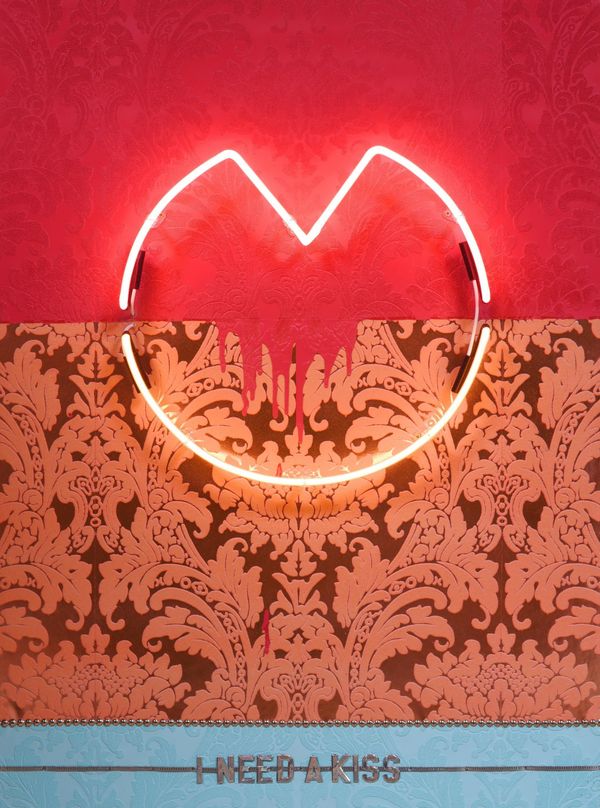 Linear Musings - I Need A Kiss

Play on a series of subliminal elements.

The unconscious nostalgic recognition of the Damask pattern flock motif acts as the support for a group of subliminal signifiers.
A narrative symbology is imparted by the stylised neon luminaire, deriving their forms from magical symbols and deconstructed graphic references relating to the implied narrative.
The colour field treatment of the base panels references a duality, order and chaos again interplay in disciplined and apparently random paint applications. The tonal values of the damask, counterpoised by the liquid paint runs, and the glitter regularity counterpoised by swept gestural impasto.
(The swept gestural impasto references the incised information found on a vinyl record, at the same time resembling lines if computer code... yet another form of linear narrative...)
The actual Linear Musing texts are derived from a collection of poems by Michael Scott... entitled... Little Usherette. They delve into a post Lynchian dystopic relationship between a cinema patron an usherette, the object of his affection. Four further Musings are derived from deconstructed advertising slogans, reassembled into cryptic statements and appellations.
The panels at the base of the works once again return to nostalgic origin, referencing the pastel chromatic banding found on the covers of 1960's Mills and Boon romantic novellas. A further level of symbolism is imparted by the nursery colours of powder blue and pink, which in turn act as a carrier for the aluminium lettered text... which is itself applied in floristry letters, normally reserved for funeral wreaths.... thus neatly encapsulating the cycle of life.
So in conclusion, what may at first resemble a decorative panel in an amusement arcade, is actually a symbol laden meditation on the infinite complexity of life and the complexity of dilemmas and opportunities it presents

Dangerous Minds practice is driven by duality. The pairs’ intuitive subliminal dialogue centres on point and counterpoint and the production of works that are, fundamentally, aesthetically appealing and which, on further inspection, inspire curiosity and cause a ripple of intellectual stimulation. Subject matter is considered in depth, deconstructed then reformulated with an essential duality at its core. Often incorporating ambiguous or cryptic text elements relating to a parallel narrative.

Our policy lasts 14 days. If 14 days have gone by since your purchase, unfortunately we can’t offer you a refund or exchange. To be eligible for a return, your item must be unused and in the same condition that you received it. It must also be in the original packaging. To complete your return, we require a receipt or proof of purchase. Please do not send your purchase back to the manufacturer. There are certain situations where only partial refunds are granted: (if applicable) * Any item not in its original condition, is damaged or missing parts for reasons not due to our error. * Any item that is returned more than 14 days after delivery Refunds (if applicable) Once your return is received and inspected, we will send you an email to notify you that we have received your returned item. We will also notify you of the approval or rejection of your refund. If you are approved, then your refund will be processed, and a credit will automatically be applied to your credit card or original method of payment, within a certain amount of days. Late or missing refunds (if applicable) If you haven’t received a refund yet, first check your bank account again. Then contact your credit card company, it may take some time before your refund is officially posted. Next contact your bank. There is often some processing time before a refund is posted. If you’ve done all of this and you still have not received your refund yet, please contact us at [email protected] Sale items (if applicable) Only regular priced items may be refunded, unfortunately sale items cannot be refunded. Exchanges (if applicable) We only replace items if they are defective or damaged. If you need to exchange it for the same item, send us an email at [email protected] and send your item to: Unit J2, Frieze Hall Farm, Coxtie Green Rd , Brentwood, ESSEX, CM14 5RE, United Kingdom.