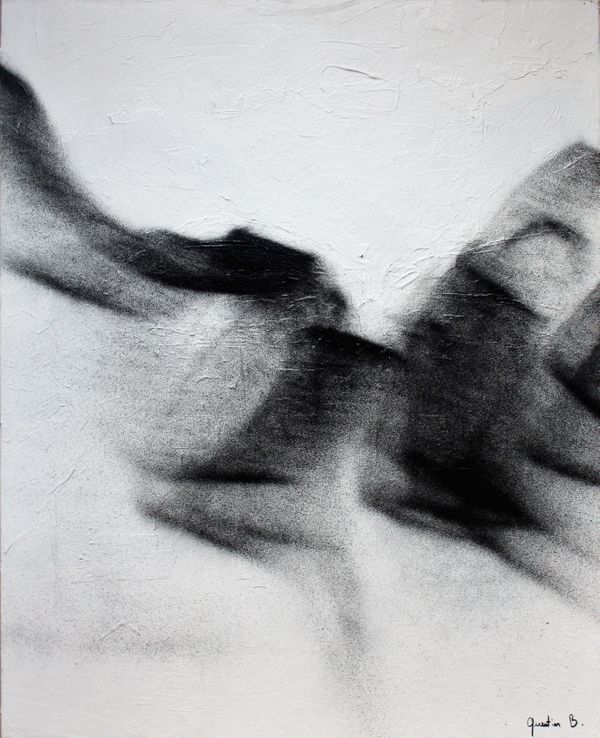 Quentin Brachet was born on 9 March 1992 in Draguignan.

In 2009, he began painting inspired by pop-art, street-art and rock culture. Jean-Michel Basquiat, Keith Harring, Jeff Aérosol, Banksy and groups such as Led Zeppelin, Pink Floyd, Stones and David Bowie were his first sources of inspiration.

Over the years, his culture has expanded and his vision has followed.

After a year of Upgrading in Applied Arts (MANAA) at the École de Condé in Nancy, he spent three years at the École Nationale Supérieure d'Arts (ENSA) in Nancy.

He then began to move towards abstraction and discovered artists such as Soulage, Twombly, Tapiès, Pollock, Fontana, Renée Levy and Georges Mathieu.

All these artists have pushed him little by little towards this abstraction which he now practices.

He currently lives in Lyon and develops his network thanks to several recent exhibitions: The Wud & Iron in Lyon, The Chapelle Saint-Benoit in Argenton-Sur-Creuse, The Cave Saint-Charles in Lyon or The Hotel Le Rocroy in Paris.

Limited Edition Art Prints with a Certificate of Authenticity

Handmade to the highest quality, printed, numbered and framed. Delivered anywhere in the world, ready to hang and to transform your space.

For our prints we use Enhanced Matte Art (EMA) 200gsm, natural white paper. A premium quality heavyweight fine art print material with a smooth, clean finish. This museum-quality paper is extremely consistent and works perfectly with large, full colour graphics or illustrations. The matte finish emphasises different highlights and tones in the source artworks; helping to create stunning works of art with the detail and vibrancy they deserve.

Our frames are created from high-quality wood, milled with simple clean lines and presented with a satin finish. This frame has a square profile measuring 20mm (front face) by 23mm (depth from wall). Available in black, white and brown.

Our Snow White standard mounts are available at depth of 1.4mm. All mounts are "conservation grade", FSC certified, 100% acid free, and will not discolour or fade with age.

Our canvas prints are stretched and framed using a 12-colour Giclée process; providing you with spectacular quality each and every time.

Free shipping anywhere in the world.

Made with and shipped from